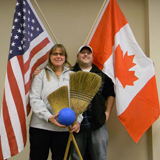 Over the last couple weeks both Canada and the US teams that will be representing their nations were captured practicing for the 1st Annual International Broom Hockey Tournament to be held this January 1, 2013 at 1:00 PM at the Birch Bay Waterslides.

The Canadian Team was captured from a distance while practicing at an undisclosed site in British Columbia.  The video clearly shows that the Canadians are working hard at mastering the skills for Broom Hockey.  Heavy security prevented any close-ups of the team.

The United States was also captured on video while they were practicing in their camp in Colorado.  It seems that the US team is having some fun in getting ready for this 1st Annual International Broom Hockey Tournament as they prepare for a formidable opponent – Team Canada.

This is an event you do not want to miss, so be sure to attend this January 1st, 2013 at 1:00 PM, at the Birch Bay Waterslides (4874 Birch Bay Lynden Road, Blaine, WA), this event is a great family friendly event held in Birch Bay.

Everyone will have a chance to win a free seasons pass to the Birch Bay Waterslides just for attending!